Central Meadow in Uplands Park to Close for Winter 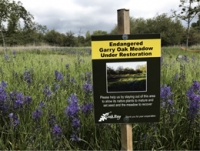 Uplands Park is an ecological treasure of national significance.

Boasting one of the highest concentrations of endangered plant species in Canada, the park is also home to a rare complex of Garry Oak meadows and woodlands, maritime meadows and vernal pools, which once covered a much greater part of our region.

Since the 1800s, Garry Oak ecosystems have shrunk by more than 95 per cent, making them one of the country’s rarest. Uplands Park contains a sizeable piece of what remains.

While all of the park’s meadows are magnificent, particularly in the spring when they are in full bloom, one among them stands out as being of particular interest: the "Central Meadow", recognizable by its iconic Garry Oak and rocky outcrop. Of all the meadows in the park, the Central Meadow has the greatest diversity of flowering plants and is home to 17 endangered species of plant.

This year, for the second time, the Oak Bay Parks Department will be closing the Central Meadow to foot traffic from November to mid-April, a time when the meadow is at its wettest, its soils most vulnerable to damage and its native plants most susceptible to trampling.