Oak Bay has a rich history of being a destination for artists to live, work and create. Below are some of the current organizations and venues for artists living or working in Oak Bay. If you would like to add your organization to this list, please contact the Arts and Culture Programmer.

Oak Bay’s Acorn Arts Award is an honorary artistic achievement award that recognizes a living individual, group or institution that has demonstrated an outstanding contribution to, and significant impact on, the arts in Oak Bay.
The award is adjudicated by the Oak Bay Arts Laureate's Public Art Advisory Committee and is administered by Oak Bay Municipality through the Department of Parks, Recreation, and Culture. Although the award is honorary and has no monetary value, the honoree receives a bespoke acorn keepsake and is publicly recognized. The Acorn Arts Award is only awarded when a suitable candidate is identified.

Please note that due to the COVID-19 Pandemic and the state of emergency in BC, this program is on hold until further notice.

Award Criteria
Oak Bay’s Acorn Arts Award is an honorary artistic achievement award that recognizes a living individual, group or institution who has demonstrated an outstanding contribution to, and significant impact on, the arts in Oak Bay. Individuals or groups that are active in Oak Bay or those who live here but are active elsewhere are eligible to apply.
The purpose of the award is threefTo acknowledge and celebrate outstanding artistic merit in Oak Bay.

Recipients of the Acorn Arts Award may include but are not limited to:

CCPA’s contribution to the arts was honoured with the Acorn Award.
This was the second annual award given out by Oak Bay Parks, Recreation and Culture

Source: mondaymag.com
The Canadian College of Performing Arts (CCPA) is the recipient of the second Acorn Arts Award. 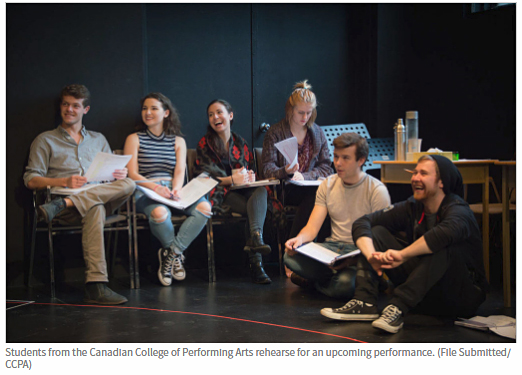 Oak Bay Parks, Recreation and Culture selected CCPA as the winner of the municipal award, which recognizes an individual or organization that has made a significant contribution to the arts in Oak Bay.

CCPA is in its 21st season of training multi-disciplinary performing artists.
“Since our beginnings in Oak Bay, the college has always held its founding belief that community and collaboration, [and] giving back, are the essence of the performing arts,” said Caleb Marshall, CCPA’s managing artistic director. “We are honoured that Oak Bay, our community, is recognizing our longevity, our commitment to excellence and making the arts accessible to all.”
The Acorn Award was presented to the performing arts school on April 4, 2019. 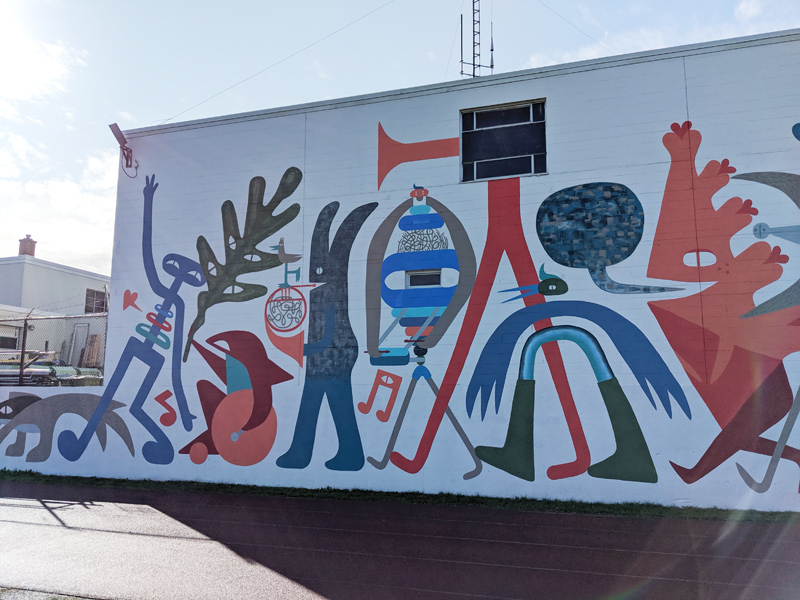 In just 20 days, artist Luke Ramsey transformed what was once a drab and dull wall into a colourful and lively work of art. He hopes the mural will make some people run faster on the track, or slow down to take in the sixty characters he has created.

“Parade of Play is a freehand and freestyle mural based on a concept derived from local input. A parade of characters make music with athletic movement. The diverse personalities come together as a whole, individuals creating community with a shared direction,” says Ramsey in his artistic statement.

He also commented on the tremendous support from the community.
“It was so nice to see how popular the space is and see how people engaged with the art. I had many people interacting with me and expressing their gratitude for my art on what was a drab wall.”

During May 2019, members of the community were invited to suggest imagery, themes or subjects that Ramsey used as inspiration for his final design. These ideas reflected the vibrant community and its environment. Anyone who sees the mural will agree that Ramsey has captured this beautifully in his work.

For more information about Luke Ramsey, visit his website lukeramseystudio.com. 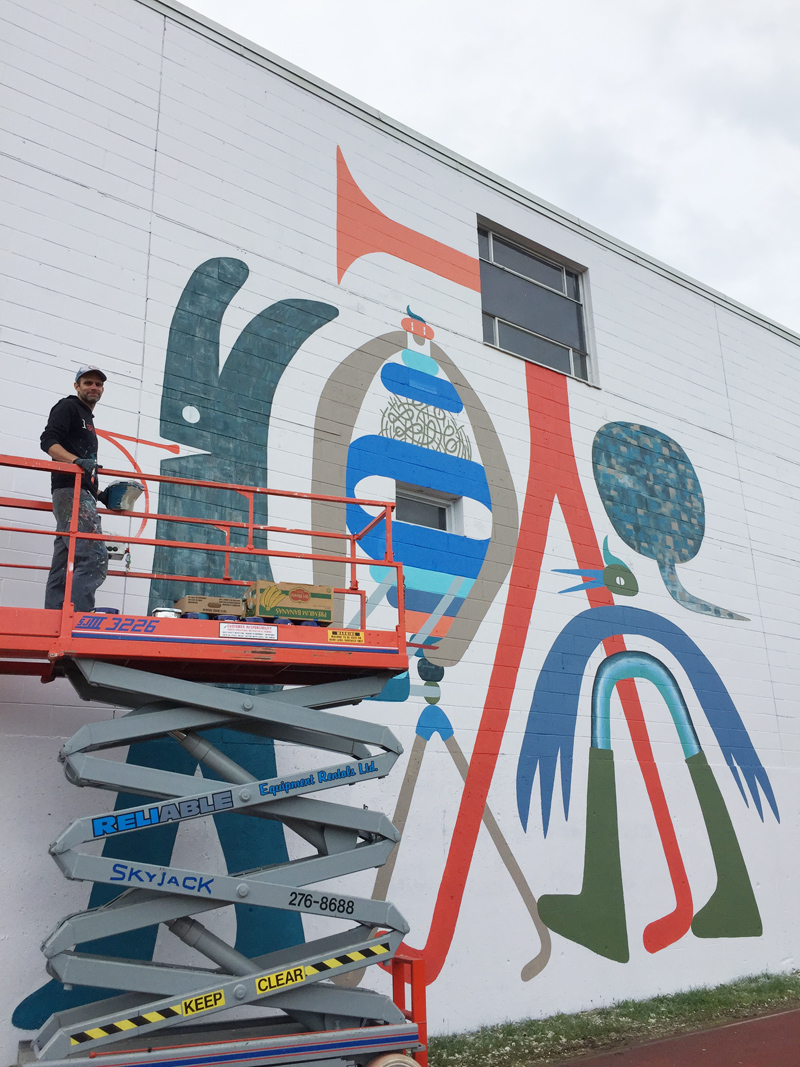 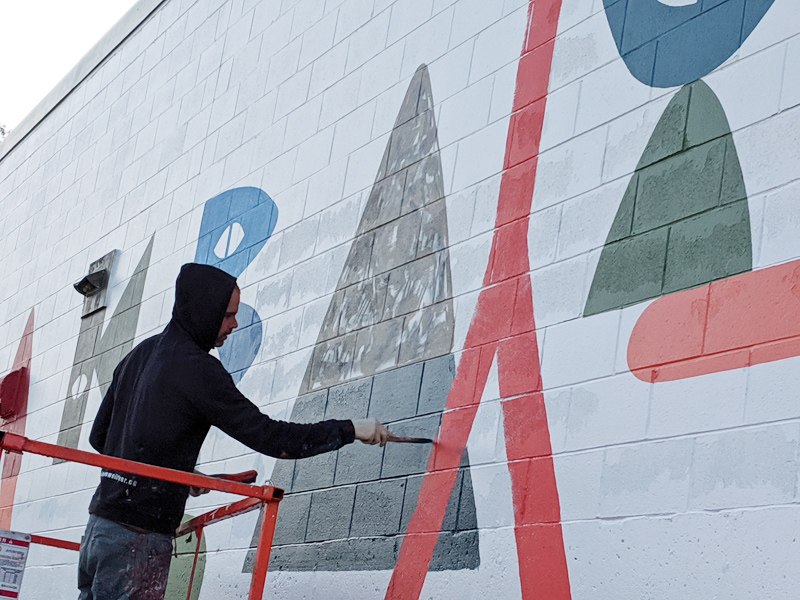 Thank you to the project sponsors:

The Estate of Maria and Paul Sarvari

The Oak Bay Branch of the Greater Victoria Public Library is a major draw within Oak Bay Village. The branch library is co-located with the Monterey Recreation Centre and can be accessed from both Monterey Avenue on the east and Hampshire Road on the west.

The Oak Bay Library is the second-busiest branch in all of Victoria (after the Central Library Branch), providing public Internet access, children's services, audiobooks, movies, and more.

A unique aspect of the Oak Bay Branch library is its incorporation of floor space from a stately, older residence on the Hampshire Road side. On a small scale, it also features one of the region’s most appealing examples of public art, which is the literary-themed stained glass window in the entrance foyer.

For hours of operation and more details, check the official webpage for the Greater Victoria Public Library.

Keep an eye on the Event Calendar for collaborative programs between the Oak Bay Branch Library and Oak Bay Parks, Recreation, and Culture during Arts and Culture Days in August!

Performing Arts can be found throughout the year at numerous community events, and form an integral part of the Oak Bay cultural experience. In addition to community events, performing arts are taught and presented at several venues in our community. Upcoming events may be found under "Community Events" on the Event Calendar or through third-party event calendars or venue websites.

Summer Concerts in the Park

During a typical summer, Oak Bay Parks, Recreation, and Culture hosts a series of free, all-ages outdoor concerts in Willows Park every other Thursday evening throughout July and August.  For more information, please visit the Arts’n’Culture Events page. (New link)

Featuring the students of the Canadian College of the Performing Arts

Cancelled until further notice due to Provincial Public Health Orders

This concert each November pays homage to those who have served Canada in the past or are serving in the present. In 2018 and 2019 the students of the Canadian College of Performing arts have also been joined by the band of the 5th Field Regiment, Royal Canadian Artillery. Admission is by donation and all proceeds go to the Military Family Resource Centre and the Canadian Heritage Arts Society. See the event calendar for dates and details for this year’s performance.

University of Victoria School of Fine and Performing Arts

Phoenix Theatre at the University of Victoria

Local churches and halls are also periodically used for performances:

Founded in 2002, The Oak Bay Community Artists Society is a group of amateur, professional and emerging artists, living and working in Oak Bay in the beautiful city of Victoria, BC.  The Society has over 40 members, and sponsors Oak Bay's yearly outdoor summer arts show Bowker Creek Brush-Up.

“The Federation of Canadian Artists (FCA) is a national organization which was founded in Kingston, Ontario in 1941 and is now headquartered in Vancouver.  The Victoria Chapter, with 125 members from Sooke to Land’s End, and from Mill Bay to the Gulf Islands, offers regular programs and workshops designed to raise artistic standards by stimulating participants to greater heights of achievement. The Victoria Chapter includes notables such as Robert Bateman, Dorothy Oxborough, David Goatley, Catherine Moffat, Clement Kwan, Marcia Semenoff, Margot Clayton, Marney Ward, Peter Paterson, Mary Ann Laing and Anne Hudec.” Quote attribution?

"Victoria Sketch Club is the oldest Canadian art group west of Ontario, which celebrated its 100th anniversary in 2009. Its story began when a little band of enthusiasts decided to form an arts society. The upshot was the Island Arts Club, comprising 56 Charter Members, including such names as Samuel Maclure and Emily Carr. The Island Arts and Crafts Society, as it became known, dominated the local art scene throughout the inter-War period. By 1935 it was the largest group of its kind in the country. In addition to Emily Carr, its leading artists included Max Maynard, Jack Shadbolt and Ina Uhthoff."

The Windsor Park Art Club was established in the 1970’s to give community members the opportunity to see and hear local artists talk about and present their various art styles and techniques either by lecture or as a ‘paint along.’  We are a multi-aged group of 40 members with different levels of expertise that gather to share and learn.  The group meets on Monday afternoons in the upstairs, light filled activity room in the Windsor Park Pavilion.