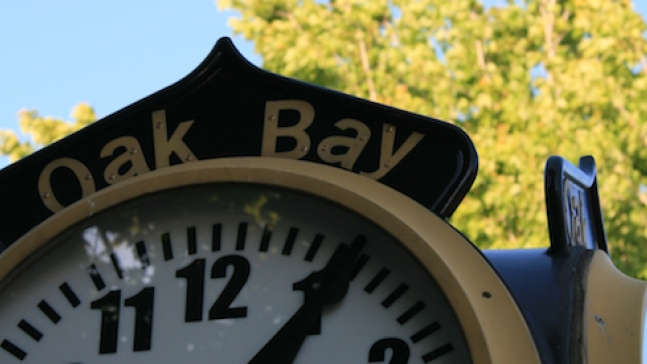 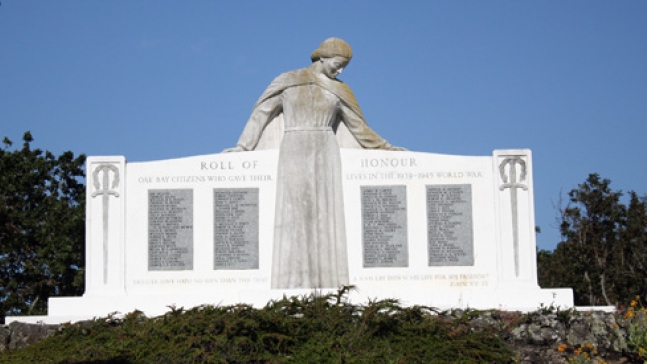 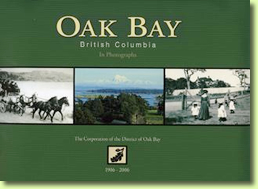 Oak Bay celebrated its Centennial in 2006 with a wide range of events and legacy projects, including:

A traditional town clock located in the heart of Oak Bay Village was sponsored by the Business Improvement Association. Under the heritage exterior, this high-tech clock uses satellite-based time synchronization to ensure accuracy within a second.

This beautifully illustrated book contains historical and current photographs of Oak Bay accompanied by a brief history of the first 100 years.

Windsor Pavilion was completely rebuilt in 2005 on the original site. The well-designed facility includes a children’s program room, a main hall, and change rooms on the first floor.  Spacious and bright multi-purpose rooms are situated on the second floor.

Windsor Pavilion is available for rental by community groups and for private functions through Oak Bay Parks and Recreation.

A new sign at Cattle Point was erected to honour the history of First Nations in Oak Bay.

A collection of memorabilia from the first hundred years of Oak Bay history was buried in Queens' Park for the bi-centennial celebration.

A stone cairn was set up on the side of McNeill Bay (also known as Shoal Bay) detailing the early years of the Bay and the McNeill Farm.  Susan Crow and Shaaron Lees donated the cairn in memory of their mother Claudia Robbins, who was the  great granddaughter of Captain William Henry McNeil.

A number of informative heritage signs were installed throughout the community pointing out historic points of interest with "In the past" pictures of the locations for comparison. These signs were created with the help of the Kiwanis Club in partnership with the Heritage Committee.

The Oak Bay Theatre was central to Oak Bay from 1936 to 1986. The iconic neon sign was restored to its former glory as part of the Centennial celebration, and to honor 50 years of contribution to the community.

Photographs from the Centennial celebrations were shared by community members. See photographs here.

Signage for a 10 kilometer trail through Oak Bay was created.  14 carved Centennial Trail Posts and two maps mark the trail that starts at Brighton and Foul Bay Road and proceeds through trails, lanes, parks and scenic roads.  The Centennial trail can be found within the Oak Bay Walking Tours pamphlet.

The 1948 Cenotaph located at Uplands Park was restored and upgraded for the Centennial celebrations.  The monument  honours the 98 men and women of Oak Bay who died in the Second World War.