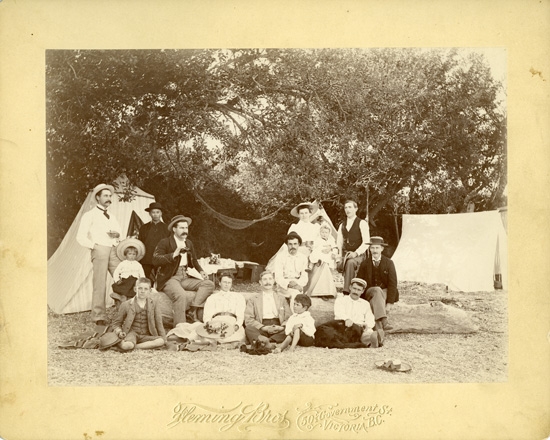 Description:
Oak Bay Camp, family outing.  A group of young Oak Bay men established the Oak Bay Camp in 1889, living in tents on the beach at the foot of Oak Bay Avenue for 2 or 3 months each summer. The small beach between Haynes Point and the Francis Rattenbury home on Beach Drive (‘Iechinihl’, now the junior campus of Glenlyon-Norfolk School) on the south west shore of Oak Bay.became part of Francis Rattenbury's estate and was known locally after 1898 as Rattenbury's Beach. The camp consisted of separate sleeping tents and a dining tent with a cook.  Close proximity to the BC Electric Tram line at Oak Bay (Windsor) Park allowed the Campers to commute to their jobs in the city. Each season the "Campers" entertained friends and family with a series of elaborate events at the camp site for the twenty years of its existence; 200 invitations were issued for the final soiree held in the summer of 1909.
Photo Number: 1994-001-001
Photographer: Fleming Brothers
Date: ca.1895
Subject:
Beaches, Events, Families, Recreation
Print Photo + Details