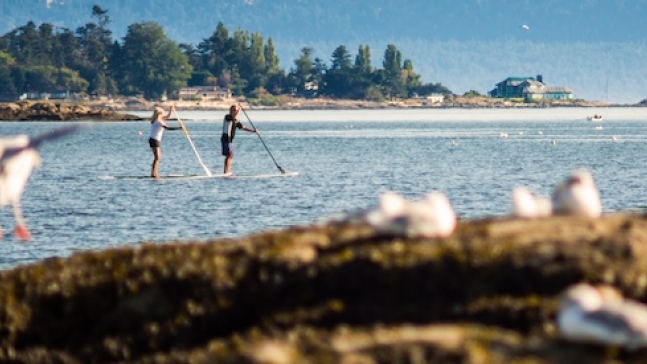 Kayaking and paddling are popular activities in Oak Bay for both locals and visitors. There is a vibrant population of sea life, interesting shorelines, rocks, islands, coves, and a Provincial Park campground just offshore. Be cautious of very strong currents and winds common along the shoreline.

Proceeding from north to south, some popular explorations include:

A sandy bay located on the Oak Bay - Saanich border.  Fairly sheltered at the head of the bay,  kayak south past the Royal Victoria Yacht Club and around the Uplands waterfront, where some of the most expensive homes in Canada can be viewed. Keep an eye out for a "Cadborosaurus" - a friendly sea monster occasionally spotted in this bay.

A rocky point with strong currents, and a popular boat launch site. Cattle Point is the waterfront edge of the 76-acre rustically natural Uplands Park.

South from Cattle Point is a long sandy beach ending at the Oak Bay Marina and Mary Tod Island.  Mary Tod Island was famously inhabited by "Jimmy Chicken" (most locals know this island as "Jimmy Chicken Island") in the early years of the 20th Century, and is now a park where  remnants of the old well and some foundations are visible.  Oak Bay Marina has both a coffee shop and restaurant, each with spectacular views. There is a very sheltered kayak launching site on the beach between Queens' Park and the Marina.

A few hundred feet off Willows Beach is a 205-Hectare area containing numerous bird nesting islands and shallow water habitats. These islands make an ideal kayaking location as they are the habitat of thousands of cormorants, gulls, and other birds, as well as resident seals, otters, and even the occasional orca or grey whale.

A little over 2km off Oak Bay, these islands are excellent paddling destinations, filled with hundred of shallow nooks and crannies that change constantly with the tide and time of day.  Most of these islands are reserve land under the care of the local First Nations, but kayaks can land and camp at the Discovery Island Marine Provincial Park.  In addition to a  lighthouse and numerous trails, many seals and sea lions call these rocky islands home.

Heading south, then west from Mary Tod Island, pass by the Oak Bay Beach Hotel and the famous waterfront holes of the Victoria Golf Club.  Watch for river otters, as groups of 20 or more are often seen on the small rocks just offshore.  Past the golf course, you will pass Mimicking Point (a rocky point with public access paths) then Kitty Islet at the eastern end of McNeill Bay.  Kitty Islet has a nice gravel beach, a picnic table, and some colourfully painted Adirondack chairs, making it a popular place to pull out for lunch.

Also known as Shoal Bay, McNeill Bay is a popular launching site for kayaks. Once ashore, stroll one block inland along St. Patrick Street for coffee or bite to eat at the cafes on the corner of Central Ave.

Located at the mouth of McNeill Bay, the Trial Islands Ecological Reserve has a picturesque staffed lighthouse, a large seal and (seasonal) sea lion population.  Sea lions can be heard barking from miles away.  This is a popular destination for kayaks, but remember that it is an ecological reserve and permission to land is required.

Paddling East past Gonzales Hill, you come to Harling Point with a gravel beach on the Eastern side). At the rocky point, you will pass the famous Chinese Cemetery, with the twin-towered altar clearly visible from the water. This cemetery was designated a National Historic Site and is a significant cultural landmark for Greater Victoria.

Past Harling Point you are into Foul Bay / Gonzales Bay and the waters off the City of Victoria. You can continue past Ross Bay Cemetery, Clover Point, Dallas Road beaches, and around the breakwater into Victoria's inner harbour.

There are a number of companies in Greater Victoria that rent kayaks and provide guided tours around Oak Bay.  Please check the Tourism Oak Bay website for more information