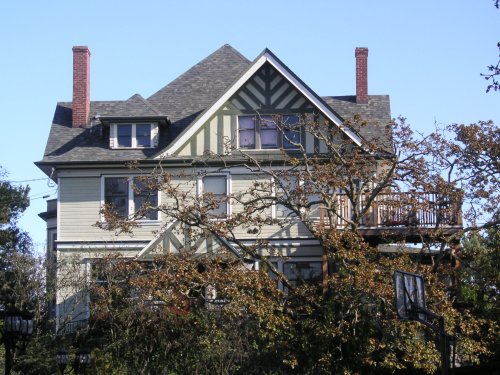 Located on the Foul Bay escarpment, ‘Edgecliffe’ is a landmark residence with prominent street presence in a residential area. This is a Tudor Revival style, two-and-one-half-storey residence, with full basement. The house has a hipped roof, gables with elaborate half-timbered details, and prominent brick chimneys.

The heritage value of ‘Edgecliffe’, built in 1910, is as an excellent representative of Arts and Crafts/Tudor Revival architecture, popular in the early part of the twentieth century, particularly in Oak Bay where British connections were strong. The house displays distinguishing elements of this style with its steeply-pitched hipped roof, multiple gables, prominent tall chimney-stacks, and half-timbering in the gables. The entrance porch of massive granite blocks, with distinctive beaded tuck pointing, illustrate the Arts and Crafts principal of truth to materials and harmonize the building and its rocky site.

Alexis Martin, a prominent Victoria barrister who had already built an Arts and Crafts house on Rockland Avenue to designs by Samuel Maclure, commissioned architect Henry Sandham Griffith (1865-1943) to design ‘Edgecliffe’. Griffith, born and trained in England, had had successful architectural practices in Winnipeg and Saskatoon before moving to BC in 1907. By 1910 Griffith had practices in both Victoria and Vancouver and was noted for the variety of his work, ranging from skyscrapers to mansions for the wealthy; in Vancouver his most important work was the Board of Trade Building, 1912. By this time he was so successful that he was able to build himself a palatial residence – 'Fort Garry' (now 'Spencer Castle') – on a rocky outcrop with a panoramic view of Victoria; in Oak Bay, as well as 'Edgecliffe', he designed a residence at 3150 Rutland Road for Thomas Wilson Paterson, Lieutenant-Governor of British Columbia (1909-1914).

This site is an important component of the Foul Bay Road cluster of contemporaneous heritage homes, built on land that had been part of the land holdings of Joseph Despard Pemberton, the first Surveyor General of the colony of Vancouver Island. It provides a significant demonstration of the social, cultural, and economic history of the area. The early houses on the Foul Bay escarpment were commissioned by affluent clients, designed by prominent architects, and employed the British Arts and Crafts architectural style. Many were surrounded by large estates with views south across the Strait of Juan de Fuca to the snow-capped Olympic Mountains, and east to the Coast Range and the volcanic cone of Mount Baker. They represent an era of prosperity in Oak Bay's development history; but, by the mid 1950s, social and economic conditions had changed and 'Edgecliffe', and many other properties on the escarpment, were subdivided, in-filled, and converted into suites.

This site is significant for its association with Norman Yarrow, who lived here in the 1930s. Yarrow was President of Yarrows Shipyards in Victoria and Vancouver, a firm which played an important role in ship building and repair on the West Coast.