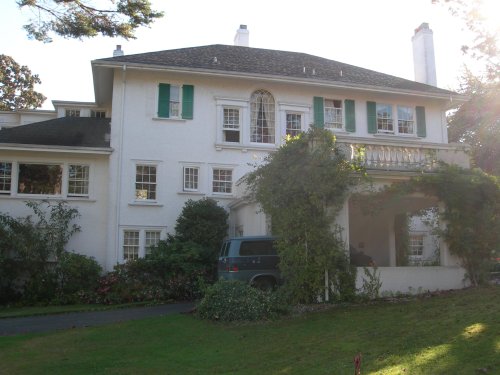 'Blair Gowie' is a landmark residence in the Italian Renaissance style; it has a prominent porte-coch_re, with decorative balustrade, above which is a Palladian window. This three-storey, plus basement, residence is situated at the junction of Mountjoy Avenue and Runnymede Place, surrounded by a hedge and a mature landscape of coniferous and deciduous trees.

'Blair Gowie' is of heritage value for its association with the Ross, and Butchart families. Robert Pim Butchart, a successful entrepreneur in the manufacturing of Portland cement, opened a limestone quarry at Tod Inlet in 1904; eventually the worked-out quarry was transformed, by Robert's wife, Jenny, into a sunken garden that is now world-renowned as The Butchart Gardens. Harry Ross became treasurer of the company, Vancouver Portland Cement Company Limited, at its beginning; he later married the Butchart's daughter Jennie, and commissioned Samuel Maclure to design this house for his family. After Harry's death, Jennie married a Russian, Andre Chirinsky-Chikhmatoff, whom she had met in Paris, and became Princess Chikhmatoff; they lived in Victoria for a while but he eventually returned to Europe while the Princess remained in 'Blair Gowie'.

The heritage value of 'Blair Gowie' is associated with its architect, Samuel Maclure (1860–1929), who designed the house in 1916 and its 1926 alterations. Maclure is closely identified with the domestic architecture he designed for prominent businessmen on Vancouver Island and the Lower Mainland, as was the case for this residence, which was commissioned for Harry and Jennie Ross, daughter of Robert and Jenny Butchart of Butchart Gardens. Maclure’s reputation for designing exceptionally beautiful homes led to his largest commission, Hatley Park in nearby Colwood – considered at the time perhaps the finest home in Canada. He gained international recognition during his forty-year career, with close to five hundred commissions. Maclure utilized many stylistic influences and was able to adapt his use of indigenous materials with versatility. Many of Maclure’s buildings with their beautiful and functional interiors have been recognized as masterworks and are considered part of the cultural heritage of British Columbia.

'Blair Gowie' is an outstanding representative of the Italian Renaissance style and particularly its shallow-pitched roof, deep eaves, and prominent Palladian window over the large porte-cochère. This architectural style is uncommon, both in Oak Bay and in Maclure’s work, adding to the value of Blair Gowie within the Municipality.

Despite some alterations, the integrity of the façade and interior is intact. This residence is an important component of the Runnymede heritage cluster of architect-designed single-family dwellings.