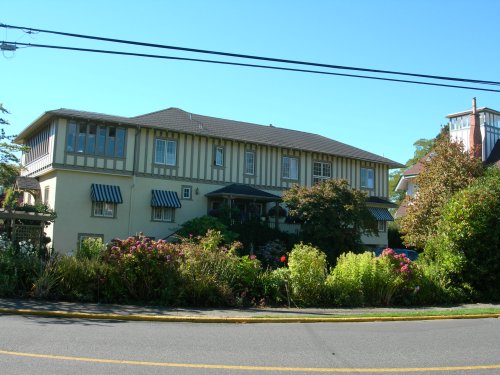 This large, three-storey stucco-clad Tudor Revival style structure with half-timbering detail on the upper storey, is located on a bend in the road just north of Margate Avenue, in a single-family residential area. The building is set amidst mature landscapes of trees and shrubs.

Oak Bay Guest House is of heritage value as the only legal Bed and Breakfast business operating in the District of Oak Bay. Built in 1912 as a speculative rental project by the construction firm the Laundy Brothers, on land owned by their father, Thomas Cecil Laundy, the property became a guest house in 1922 and has been run as one ever since. The adjacent building at 1064 Newport Street was annexed in 1920 and the property grew to become a landmark in the streetscape.

Oak Bay Guest House is significant for its association with the Cridge family, Harvey Combe and William (Bill) Scott. Ellen Cridge, who married Thomas Laundy in 1891, was the daughter of Edward Cridge who arrived in 1854 as Chaplain of the Hudson's Bay Company on Vancouver Island. He was Rector of the Anglican church at Victoria until the mid 1870s at which time, in a public doctrinal difference, he and his followers, most of them Hudson’s Bay Company families, formed a congregation of the USA-based Reformed Episcopal Church which built the Church of Our Lord (1876), now a National Historic Monument (1990) in Victoria. Cridge was elected Bishop of the Reformed Episcopal Church and his diocese included all of Canada and the United States west of the Rocky Mountains. The Cridge name is associated with Victoria’s Cridge Centre for the Family. Harvey Combe, who lived at the house in the 1920s, was Registrar of the Supreme Court of British Columbia and an avid golfer. He was instrumental in identifying the present site of the Victoria Golf Club, on property owned by the Pemberton family, descendants of Joseph Despard Pemberton, the first Surveyor General of Vancouver Island. The Combe family were prominent members of the Club and won numerous regional and provincial tournaments. Bill Scott, the ‘Lighthouse Philosopher’, and well-known local 'character', owned what was then the Newport Guest House from 1939, when he purchased the property to provide a home and an income for his family while he remained working as a lighthouse engineer in China, where he was later interned as a POW. Scott was known in Oak Bay and Victoria for fighting what he saw as miscarriages of injustice, particularly for the less fortunate.